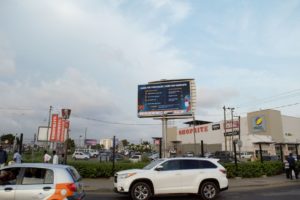 December 2020 – Global Out of Home Media has added to its growing African digital network by securing a landmark LED billboard site in Accra, the capital of Ghana.

The 6m x 10m state-of-the-art large format digital billboard site is located at the popular Accra Mall, Ghana’s premier shopping centre with an average footfall of over 500,000 shoppers per month, situated on Spintex Road, adjacent to Tema Highway. This is the key route utilised to access the popular Accra Mall, which became the country’s first large-scale shopping centre when it opened in 2008.

Accra Mall is a landmark destination and is anchored by South African retail giants Shoprite and Game. It has a food court featuring international franchises such as Burger King and KFC, and is home to a Mr Price, a media store that sells a host of electronic products, and a five-screen cinema theatre complex, making it a retail and entertainment destination for residents of Accra. Another featured tenant is Pandora, the high-end jewellery store brand, reflecting the purchasing power of Accra’s shoppers.

“The securing of this key site at Accra Mall is just one of many in our growing digital billboard pipeline,” says Marcell Entres, General Manager of Global Out of Home Media. “Digital forms a key part of our development strategy going forward, among many other key initiatives we have, as we continue to pursue effective marketing solutions that deliver real value and return on investment for our clients.”

Accra is the largest city in Ghana, with an estimated population of 2.475 million, and according to Hootsuite statistics released in January, the country’s internet penetration stood at around 35%, totalling 10.3 million consumers, whilst the number of active social media users was around 5.8 million. However, the standout figure standing out from the Hootsuite report was that of mobile subscriptions, which according to the report stood at 38.78 million, representing penetration of 130%, as it relates to Ghana’s estimated population of 29.15 million.

This is reflective of Ghana’s wealth and a change in behaviour for the country’s consumers, who now shop and pay using their mobile phones.

With Out of Home considered the last window of opportunity along the path to purchase, engaging consumers in what is becoming a digital first environment can drive increased awareness and purchased intent. For example, in Ghana, mobile financial services are mostly used by those poorly served by the traditional financial sector. The 2017 Global Findex database indicated that access to formal financial services rose from 41% of adults in 2014 to 58% in 2017. This was largely attributable to mobile accounts, with 20% of digital-wallet users being previously unbanked. These now represent about 40% of all account holders, compared to 13% in 2014, according to the database.

The cutting-edge Accra Mall digital billboard site is just one of many Global Out of Home Media projects in Accra and a sign of things to come, as Africa’s Out of Home market leader grows its presence in one of the continent’s most exciting and attractive economies.

About Global Out of Home Media

Global Out of Home Media was established in 2000 and is one of the largest African Out-of-Home media owners with over 2,100 sites consisting of strategic airport, roadside, digital and iconic large format holdings in key markets.

A leader in the Out of Home industry, Global Out of Home Media prides itself on service excellence and a professional approach to quality delivery.

For more information, visit us at http://www.globalooh.net/ or alternatively contact us on info@globalooh.net