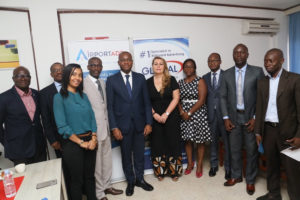 Global Out of Home Media has gone a long way to strengthening its relationship with the Ivory Coast government, thanks to a highly-successful meeting in Abidjan with the country’s Minister of Communication and Media, Mr. Sidi Tiemoko Touré.

The Minister stopped by at Global Out of Home Media’s Abidjan office for a surprise visit, as part of his tour of the country’s main outdoor advertising companies and media agencies.

He has embarked on this tour in an attempt to better understand the out of home space and the important role it plays in the broader Ivory Coast marketing industry. The visit to Global Out of Home Media’s Abidjan office was an opportunity to build a stronger relationship with one of the main players in the country’s out of home market, whilst engaging on matters of mutual interest.

“We’re honoured to have received the Minister at our offices and the time spent with him and his team proved incredibly valuable, as we were able to engage him on important matters concerning the out of home industry, including working towards a more regulated environment,” says Claire Malthet, General Manager of Global Out of Home Media Ivory Coast. “We’re very grateful for this opportunity and commend the Ivory Coast government on its proactivity and openness, as it seeks to better understand this industry through engagement with the main players.”

The Ivory Coast is an important market for Global Out of Home Media, which sees the country as an emerging player in West Africa and increasingly attractive for advertisers.

The Ivory Coast recorded impressive GDP growth of 7.4% in 2018 and 2019, and predictions are that it could remain above 7.0% during 2020–21, assuming good rainfall and favourable terms of trade1.

Further, according to PwC’s Retail in Africa report, consumer spending in Ivory Coast surged from $18.2bn in 2014 to approximately $26bn in 2019.

“While the market for consumer goods is relatively competitive with numerous multinationals being active, opportunities do exist for agile enterprises that can swiftly adapt to market demands,” said the report.

All of which makes for an attractive market for OOH advertisers.

It’s well-documented that the Ivorian government has implemented several reforms to encourage foreign investment and improve the business environment, and the visit of the country’s Minister of Communication and Media to the offices of Global Out of Home Media is another example of that forward-thinking approach.